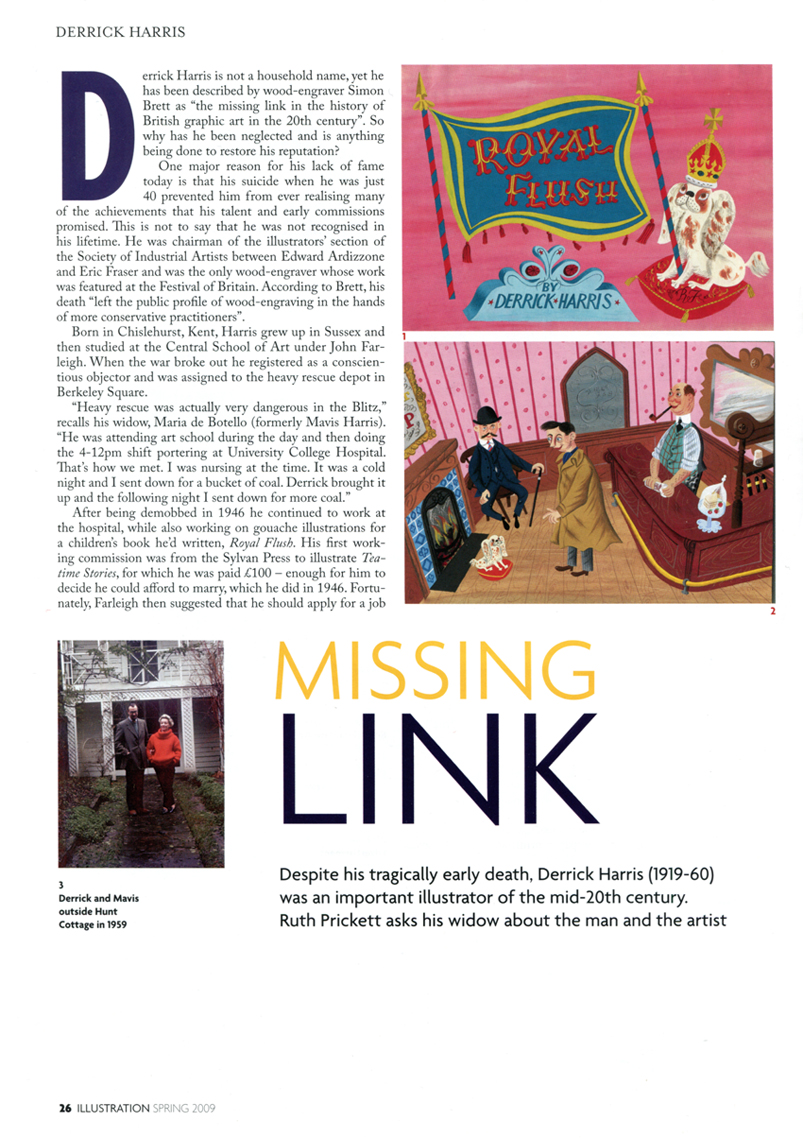 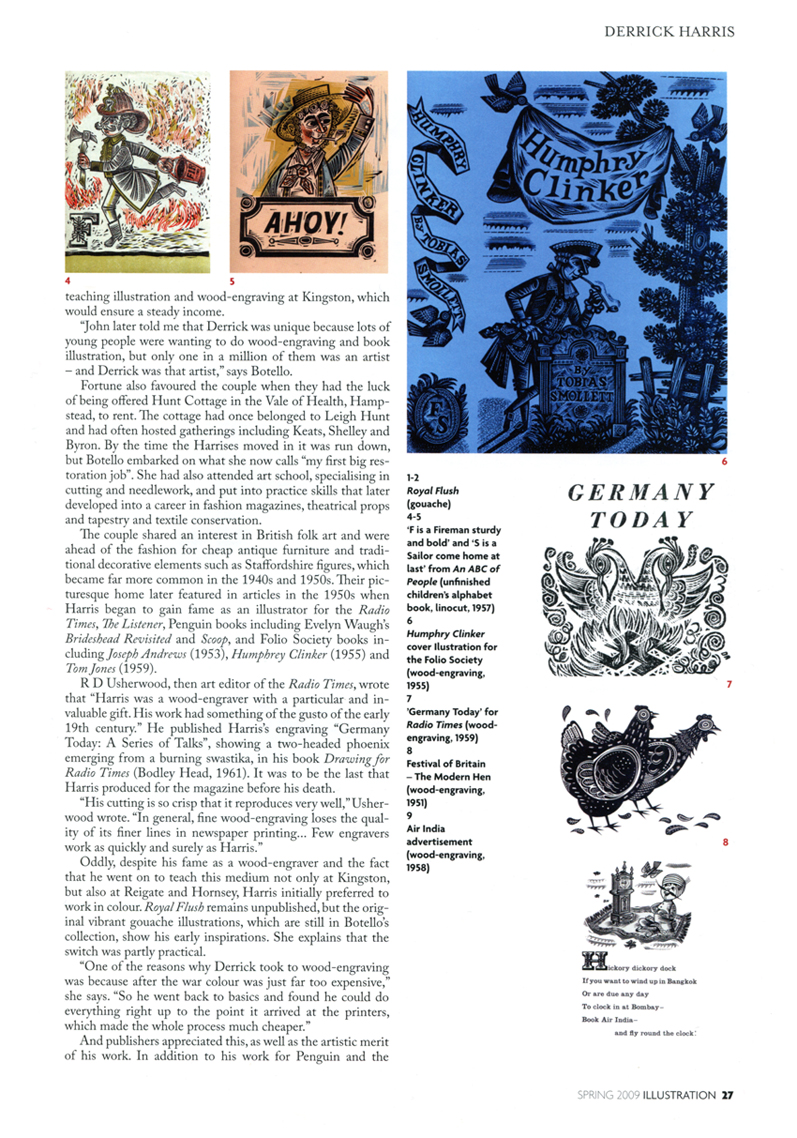 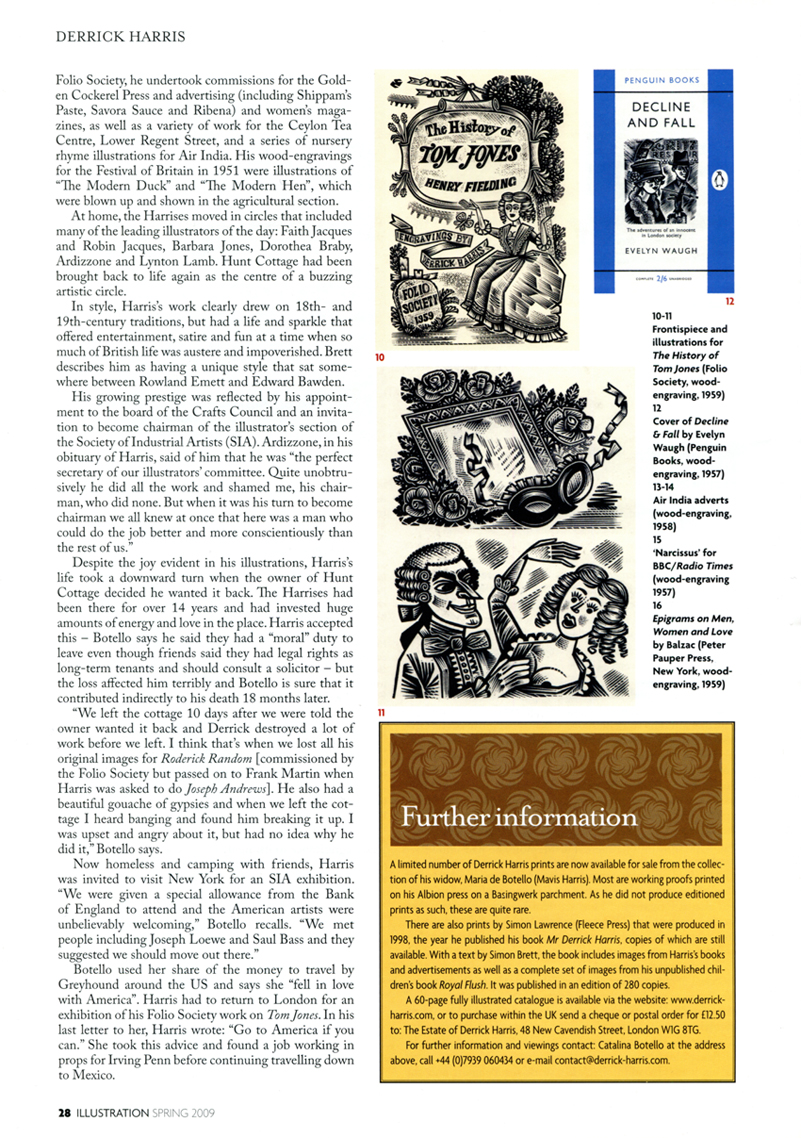 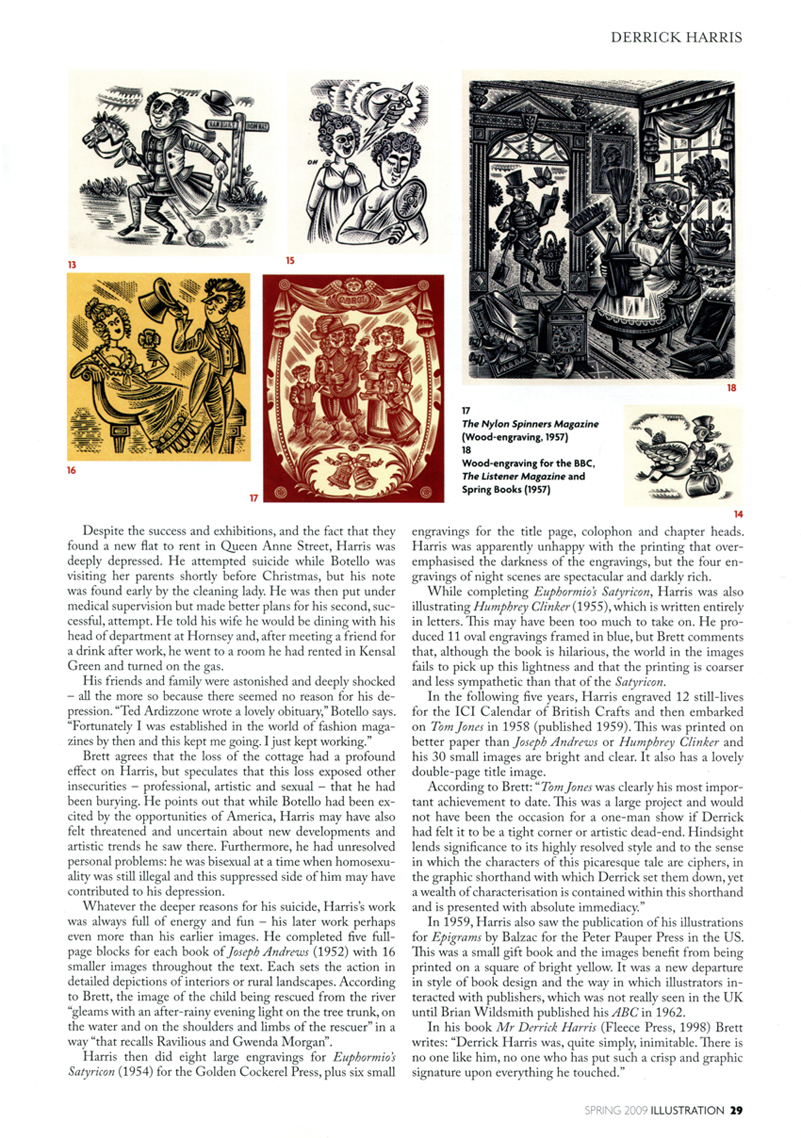 "As soon as I saw him I said to myself, that man is no ordinary porter.’’ This is Maria de Botello, ninety-years-old, recalling how she fell for a brilliant but now forgotten artist. "You could tell by his hair, the way he carried himself. There was something about him."

In 1946 Maria de Botello was called Mavis Flood, a young nurse from Leeds working at University College Hospital, London. She did not see the porter’s face but his broad back and tall stature, even his gait, were enough to spark her interest.

October 1946. London is cold and grey. The nurses warm themselves by the fire as each long night is measured out in coughs and groans. When the flames dip, the nurses send down for a bucket of coal. Mavis, intrigued by the tall man, orders coal on a regular basis. But the porter does not reappear: each bucket of coal is accompanied by a disappointing specimen. She persists, however, in requesting the buckets and soon her man is attached to one of them. His name is Derrick Harris.

The nurse and the porter began a relationship. He bought her cakes from the local tea shop and they ate them in front of the fire. She visited him at his digs in Belsize Park. He took her to see Donald Wolfit as Lear. The Yorkshire lass had been right about her man being no ordinary porter. He was a talented artist, with a particular gift for wood engraving. At the time of their meeting Harris was attending art school by day and working as a porter in the evenings. Simon Brett in the sumptuous book Mr Derrick Harris tells us that the courtship was slow: Mavis sat under the mistletoe at Christmas for an hour before Harris even noticed her. Whether it was mistletoe or a bucket of coal that brought them together, Mavis and Derrick were married within a year, in June 1946, on the £100 that Harris received for his first job, a set of illustrations for Teatime Stories. It was the start of a successful and productive period for both. But by 1960 Harris was dead. He became the lost man of British graphic art.

Born in Chiselhurst in 1919, Harris studied at the Central School of Arts and Crafts. When war broke out, he registered as a conscientious objector and was assigned to the heavy rescue depot at Berkeley Square. It was hard work but it enabled him to continue his studies. When the war ended, Harris opted to work as a porter until demobilisation.

The Harrises set up home in Belsize Park. Maria recalls how the kindly Japanese landlady lowered the rent. There is tenderness, even excitement, in her voice as Maria recalls those early, adventurous days. Before long, they were given the opportunity to rent a cottage in Hampstead, a run-down property that had once been the home of Leigh Hunt. They flourished in this new setting. The cottage inspired them. Maria describes their working day: up early and straight into the studio, working till brunch. Then it was back to work, with a tea-break before dinner. Whoever had the least pressing deadline did the washing up.

Those post-war days were austere, with art materials hard to find, but the Harrises were inventive and imaginative. Their cottage became a hub of creativity, visited by illustrators Barbara Jones, Edward Ardizzone, Lynton Lamb. Mavis, in addition to working in an antiques shop, devoted her time to fabrics and began to make a name in the world of fashion, designing an outfit for the actress Leslie Caron, while commissions came in on a regular basis for Harris. Together they helped revive interest in British folk art. (In 1951 the Black Eyes and Lemonade exhibition, curated by Barbara Jones, opened at the Whitechapel Gallery.) They sourced unwanted furniture, collected old prints and Staffordshire ceramics, championed vernacular art. The cottage was shaped by an unfussy, cheerful aesthetic. In their appreciation of the past they were decades ahead of their time. Today we are familiar with the marketing of vintage styles, in everything from clothes to food. But the Harrises were concerned with what Brett calls ‘historically authentic homemaking’ as opposed to quirky nostalgia or an insular anti-modernism.

The cottage featured in various magazines of the day; the articles now seem quaint, almost comical, but what comes across is the energy and sheer creativity of the couple. The cottage looks modern and fresh. There is a sense of play in their work. "We had a lovely life together," says Maria. She goes on to recall, with tender spryness, how Derrick, terribly short-sighted, would cut and carve with his nose almost to the block, lost in the patterns of his mind. "He’d look up in surprise. He was so absorbed in his work." It’s a charming image, one that Harris himself might have engraved.

There is a photograph of the Harrises standing arm in arm outside the cottage. He is a big, imposing man. But there is a certain gentleness in his bulk. Bespectacled and suited, he has the face of a thinker, an observer, while Mavis, smiling in a vibrant red jumper, looks poised to bounce into life and work.

Harris, sadly, is a neglected figure in post-war British art. But he was not unrecognised in his day, becoming chairman of the Illustrators’ Group of the Society of Industrial Artists (SIA) and a member of the Crafts Council’s board. Ravillious, Bawden, Ardizzone are familiar names, their output widely reproduced. Harris, though, remains in relative obscurity, overshadowed by his peers, despite the obvious joy and verve of his work. Most of his images are in black and white, but they are far from sombre. He is the most accessible of artists – with sharp, bold forms and a fine eye for the comic – yet there is also complexity in his vision. He compensates for lack of colour with intricate patterning and unexpected flourishes, letting his imagination roam with all the freedom of an assured craftsman. He uses line and form as other artists use colour. (Colour printing was prohibitively expensive after the war. Monochrome was far cheaper, a stricture Harris used to his advantage.)

To me, many of his images are the visual equivalent of trumpet blasts, especially the pieces depicting a single character: Dick Whittington, Le Bourgeois Gentilhomme, The Drinker. These are sharp, succinct summations of character. He contributed weekly illustrations to the Radio Times and The Listener, earning the nickname Radio Times Harris. He produced a wide range of commercial work for Shippams, Air India, Ribena, ICI, and had a genius for turning the most unpromising remit into something unique. Be it a calendar for ICI or an advertisement for Army and Navy Stores, his humour and invention shone through. He is perhaps the most distinctive illustrator of the period: there is no mistaking his particular and sometimes peculiar style. He produced the Festival of Britain’s sole wood engraving; his illustrations graced the covers of Penguin paperbacks (Scoop and Decline and Fall are particularly successful); he even designed delightful Christmas cards for friends and family (many of which feature a cheerful sausage dog). But it was book illustration that inspired him to produce what he considered his best work, such as the Folio edition of Tom Jones and Euphormio's Satyricon for the Golden Cockerel Press.

Catalina Botello, Maria’s daughter, and an artist herself, is archiving Harris’s work. It is a daunting but visually thrilling task. I had the privilege of visiting the collection. The diversity and quality of the work is stunning. Images leap off the page. There are posters, prints, handbills, pamphlets, sketches, paintings, doodles, books. He was a versatile artist. The gouache paintings for his unpublished children’s book Royal Flush seem to glow. (Harris wrote the story, too, but this has been lost.) The common theme in all this work is joy – a gutsy, robust, pungent joy. Harris is never twee. There is nothing prissy or coy about his art. Wenches, rascals, rogues, bawds abound. This is not to say his work is unwaveringly jolly. There are contemplative pieces such as the Tower of Desolation in Humphry Clinker  (Folio) or the run-down Brideshead Castle (Penguin). He composed a poignant image for the Radio Times, showing a two-headed phoenix rising from a burning swastika, while the ICI wood engravings, largely unpeopled, have a pensive feel. It is hard not to warm to Harris’s work, whatever the subject, for it is invariably a celebration of life and art.

The idyll at Hunt Cottage did not last. The owner wanted to return. The couple, despite having lived there for 14 years, acquiesced to the demand and within ten days they had moved out. It was a major blow. Harris, according to Maria, destroyed a number of works. But even at this dark time America offered new possibilities.  The American Institute of Graphic Art invited Harris to bring an exhibition of the SIA’s Illustrators’ Group to New York. The exhibition had previously been on an Arts Council tour of Britain, opening at the Folio Society.

Catalina Botello plays me a rare, perhaps unique recording of Harris speaking. He is delivering a speech at the New York show. He is introduced by a woman whose accent is so posh that she makes the Queen sound positively plebian. Harris has a gentle, meandering way of talking. Every sentence seems to be an aside, unconnected to previous sentences, until he ties everything together in a neat knot of wit. He talks with intelligence and modesty about the exhibition. He jokes that had it featured French artists, the show would have been one of fireworks and spectacle, a display of Gallic dazzle. Book illustrations, Harris goes on to explain, should not distract from the text they inhabit. He is no polemicist but he makes his point with droll authority. He muses on how Mavis and he, as visitors to New York, would like to be described. ‘Foreigners’ is rejected as too hostile. ‘Tourists’ is condescending. ‘Provincials’ too rude. He proposes ‘out-of-towners’, and one can hear the smile in his voice as he tastes the phrase like a cocktail.

Looking at the blocks used by Harris, one is struck by how incredibly detailed they are, miniature landscapes of emotion and craft: the cutting is exquisite. His art is an intricate one, full of busy and dynamic forms, yet he avoids otiose ornament. Certain motifs and devices recur throughout his work. Arrow-like chirping birds. Hatched skies and humped clouds. Angular scrolls and springy ribbons. Mirrors alive with zigzags. One of my favourite pieces, for a Christmas card, depicts a helter-skelter at Hampstead Fair. It is a tower of pattern and yet it does not overpower the scene. In foreground two lovers face one another. Flags flutter stiffly against a sky lively with lines and dashes.

What inspired Harris? Maria considers my question. "Oh, everything. He was inspired by the day. He was always doodling, always had something on the go." Looking through the archive, one is struck by the warmth, precision and concentrated structure of even preliminary sketches.

In 1960 Harris killed himself. There is no way of knowing why. The loss of the cottage was painful. He was possibly bisexual and this dual existence may have taken its toll. Perhaps he feared an artistic dead-end. He certainly suffered from depression. It’s all speculation. Maria is sanguine about his death: after all, it happened a long time ago. Catalina is more direct. "He won’t be the first artist to kill himself and he won’t be the last." This sounds flippant, even callous, but it isn’t. She makes an important point. What remains of any artist is the work. Harris’s untimely death led to his achievements slipping out of sight. His pictures are festive and fun, technically brilliant, and reward repeated viewing. The archive is nearly complete. The vigorous, celebratory art of Derrick Harris is alive and well: it deserves a new audience.